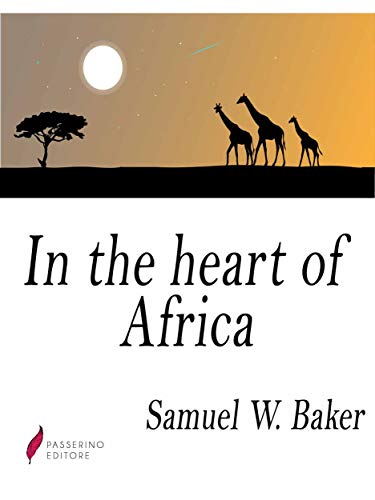 In the Heart of Africa is a exciting tale about adventurerer and big-game hunter Sir Samuel Baker’s travels across Africa with his wife.

Sir Samuel White Baker (8 June 1821 – 30 December 1893) was an English explorer, officer, naturalist, big game hunter, engineer, writer and abolitionist. He also held the titles of Pasha and Major-General in the Ottoman Empire and Egypt. He served as the Governor-General of the Equatorial Nile Basin (today’s South Sudan and Northern Uganda) between April 1869 and August 1873, which he established as the Province of Equatoria. He is mostly remembered as the first European to visit Lake Albert, as an explorer of the Nile and interior of central Africa, and for his exploits as a big game hunter in Asia, Africa, Europe and North America. Baker wrote a considerable number of books and published articles. He was a friend of King Edward VII, who as Prince of Wales, visited Baker with Queen Alexandra in Egypt. Other friendships were with explorers Henry Morton Stanley, Roderick Murchison, John H. Speke and James A. Grant, with the ruler of Egypt Pasha Ismail The Magnificent, Major-General Charles George Gordon and Maharaja Duleep Singh.